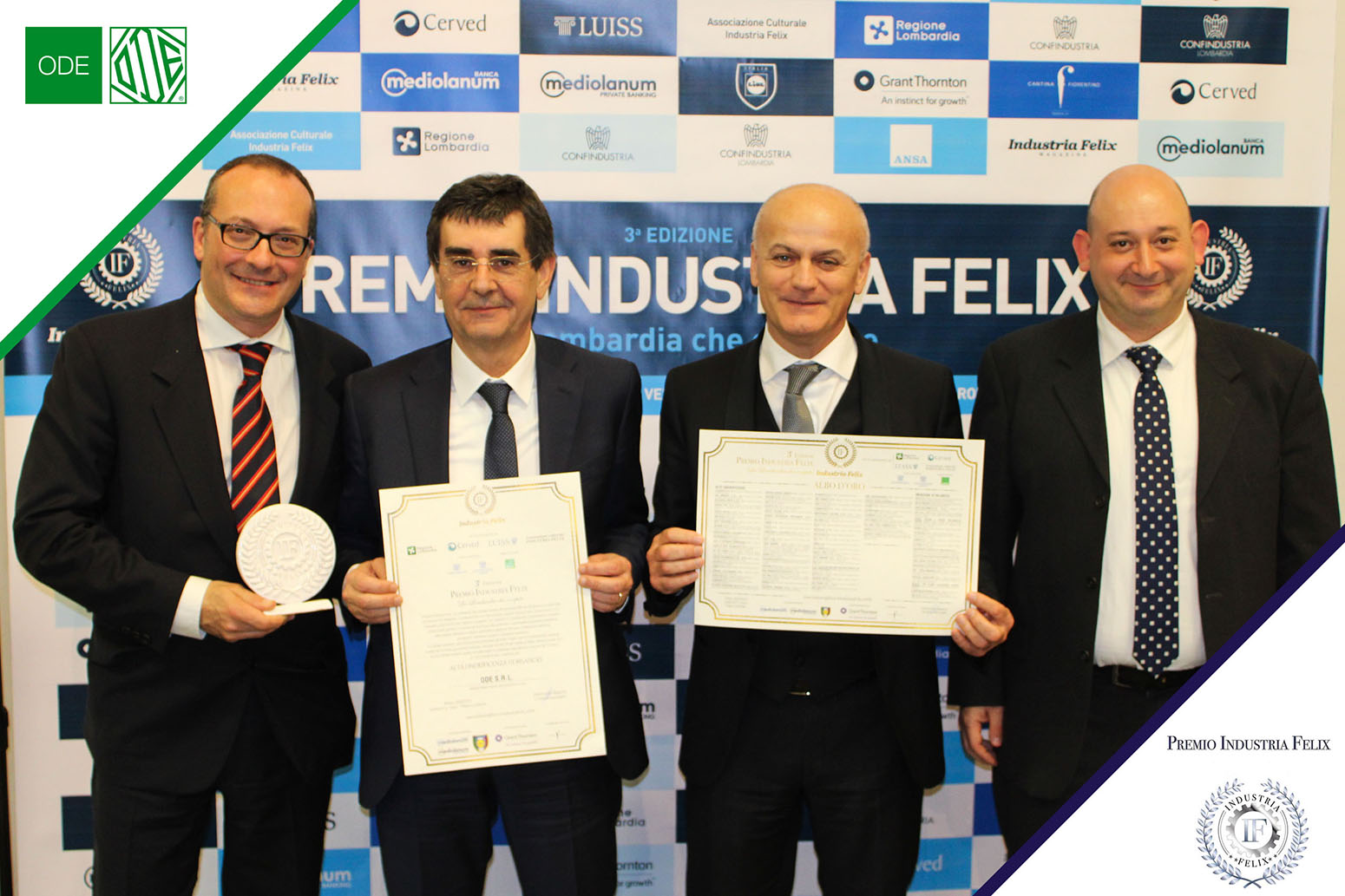 The “Industria Felix – La Lombardia che compete” award, organized by “Industria Felix Magazine” and “Cerved Group”, is an event in which provincial and regional records of companies in comparison to financial statements parameters (Menzioni di Bilancio) and the best managerial performance of small, medium-sized and large enterprises on a provincial and regional scale (Alte Onorificenze) are recognized.

The scientific committee analyzed financial statements of 33,000 companies with 2 million/19.8 billion € revenues based on data from “Cerved Group” (Italy’s leading information provider and one of Europe’s major rating agencies).

ODE was selected and awarded for its managerial performance and its financial reliability.

Last Tuesday, March 5, our company was actually recognized for the high honor of financial statements among other 85 companies, awarded as business excellences. The award is the highest recognition conferred for financial statements as the Best Medium-sized Industrial Company of the Province of Lecco, positioning ODE in sixth place in the Lombardy regional level.

The ceremony was held in Milan at Palazzo Lombardia and was organized in collaboration with “Cerved Group”, “Lombardia Region”, “LUISS Guido Carli University”, “Industria Felix”, “Italian Industrial Association” (National and regional) as well as with the sponsors of “Banca Mediolanum”, “Lidl Italia” and “Grant Thornton Consultants”.

The event was attended by the president of “Italian Industrial Association” Vincenzo Boccia and the president of “Italian Industrial Association Lombardia” Michele Bonometti, the managing director of “Banca Mediolanum” Massimo Doris, the director of “Il Sole 24 Ore” Fabio Tamburini, the president of “Lombardia Region” Attilio Fontana and the vice-president Fabrizio Sala. The guests’ speeches have underlined the central role of Italian industrial companies, and particularly, of the Lombardy one that proves to be a virtuous example for Italy with a strong look towards Europe and the world.

Our CEO Vito Spinelli and the management were present to collect this award that symbolizes the prestige obtained thanks to the strong commitment of ODE.
A recognition that fills us with pride and that shows us as we are a healthy and strong company.